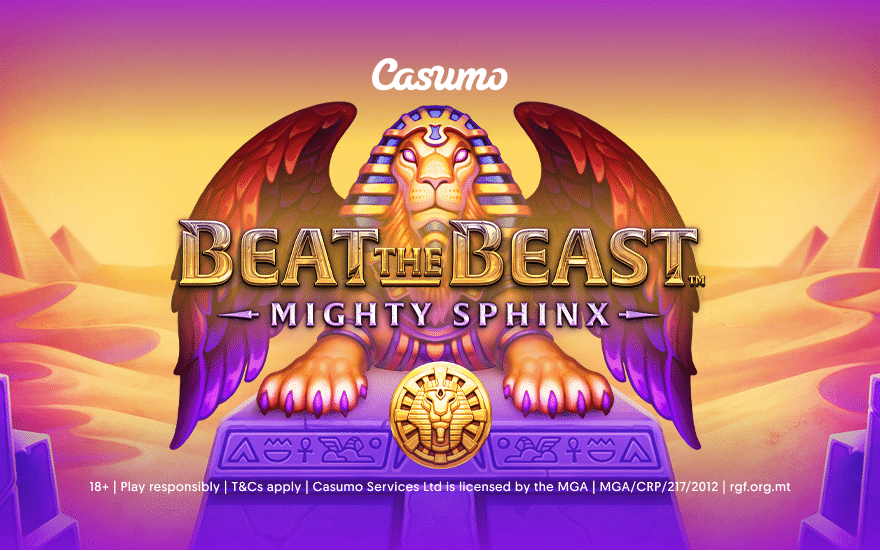 Thunderkick has released their second slot game in a series of five called Beat the Beast.

Their first release was Kraken’s Liar and now it’s time for Mighty Sphinx.

These games all come with similar gameplay, but are different enough to make them all fun to play.

Beat the Beast – Mighty Sphinx offers 9 lines with an Egyptian theme. And wild symbols on all reels, that also act as the scatter symbol.

During any spin in the base game this random feature can trigger.

Between 1 and 3 random wild symbols will be added to the reels. After this the reels will stop spinning.

Getting 3 or more scatter/wild symbols will award 10 free spins.

Before each free spins between 1 to 3 random wild symbols will be added to the reels.

When you get 3 or more scatter symbols during free spins you will be awarded 5 more free spins. But one of the medium paying symbols will also become an extra wild symbol.

In total their are 4 different medium symbols, which can all become extra wild symbols when you get at least 4 re-triggers.

I liked Kraken’s Liar a lot, but I like Mighty Sphinx even more. The random wild feature is nice and increases the chance to trigger the free spins feature.

But I especially like the free spins feature. This game can pay out big wins, especially when you are able to get some of those extra wild symbols.

You are able to play this game at Casumo. This is a limited time exclusive title, so only Casumo offers the game. Mid April other casinos will also add this game.