It’s time for another Play’n Go slot release. And this time the game is called Canine Carnage.

This game uses, as the name suggests, a dog theme. But mixed with a post apocalyptic theme. A bit if the Mad Max movies was about dogs instead of humans.

The game uses 5 reels that are each 3 symbols high and comes with 243 ways. Which can be increased by special wild symbols.

You will find standard card symbols and all sorts of futuristic dogs. There are wild symbols on all reels and bonus symbols on reels 1, 3 and 5.

Canine Carnage comes with a maximum payout of 3.000 times your bet. A bit low for a Play’n Go title. 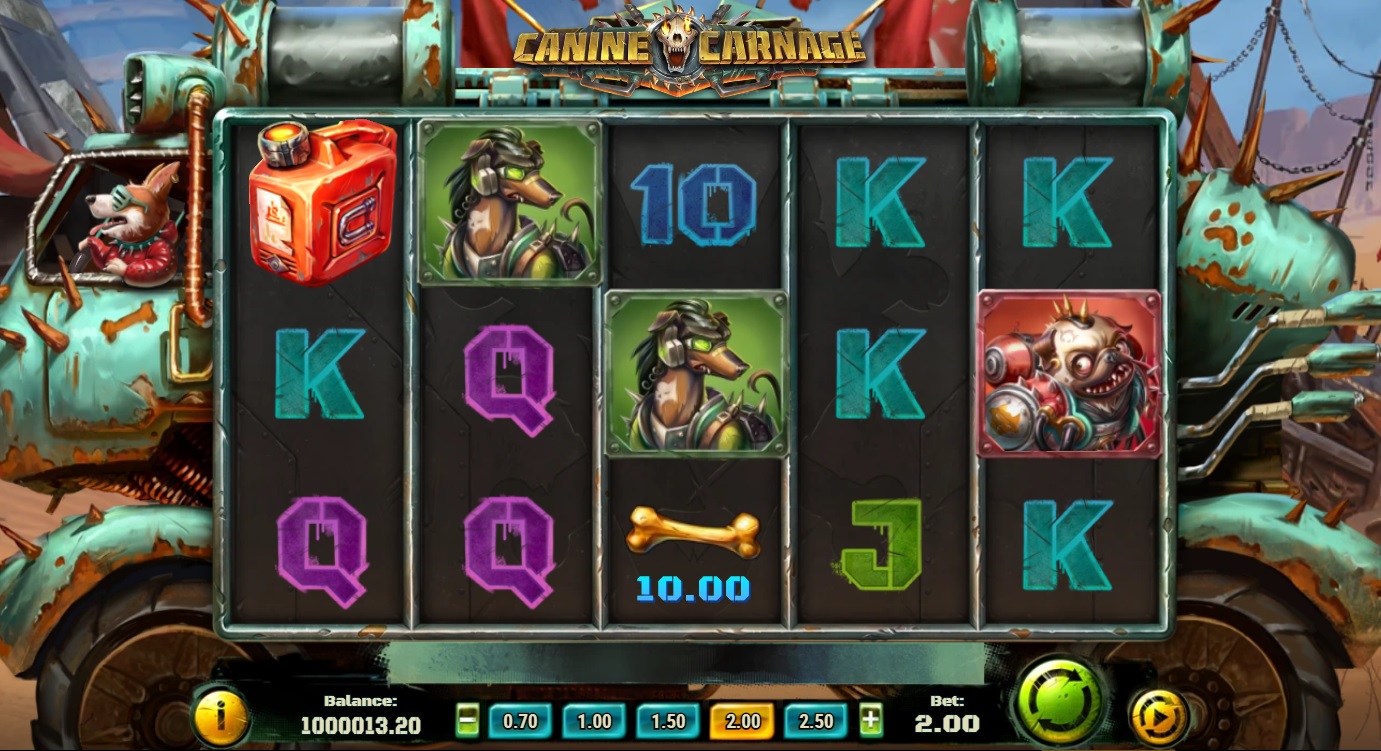 When one or more wild symbols appear on the reels all normal symbols and wild symbols on the right of a wild symbol will be split into two. Increasing the total ways of the game.

It is also possible that between 1 and 3 random wilds will be added to the reels on any normal spin. 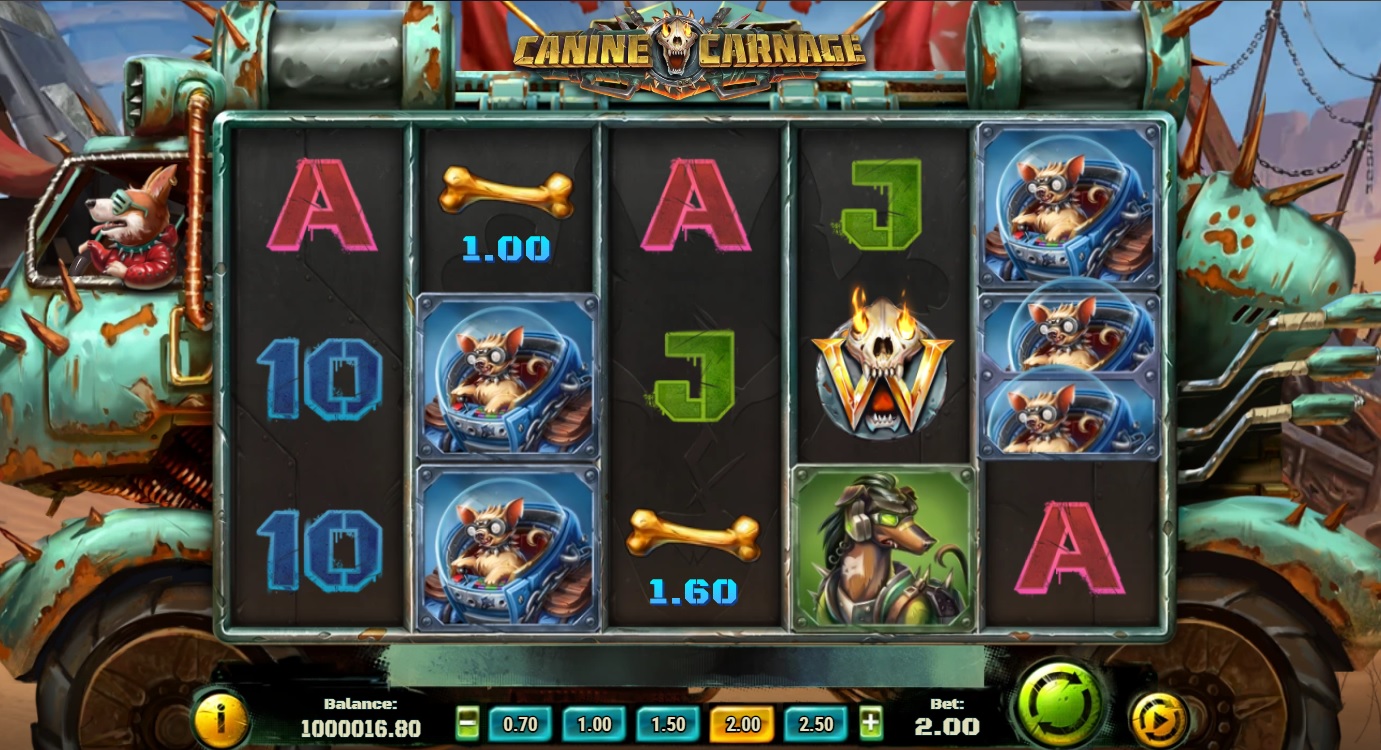 On any spin multiplier can be randomly added to the reels. This can be a x2, x3 or x5. All winning combinations are multiplied by the multipliers in view. If more than one multiplier appears, the values are added together.

Golden Bones symbols can appear on all reels and will have a cash value of up to 5 times bet.

If one or more golden bones appear the same time as the bulldog, which is a special collection symbol, all values are collected.

Random bonus can also be added to the reels during any spin. 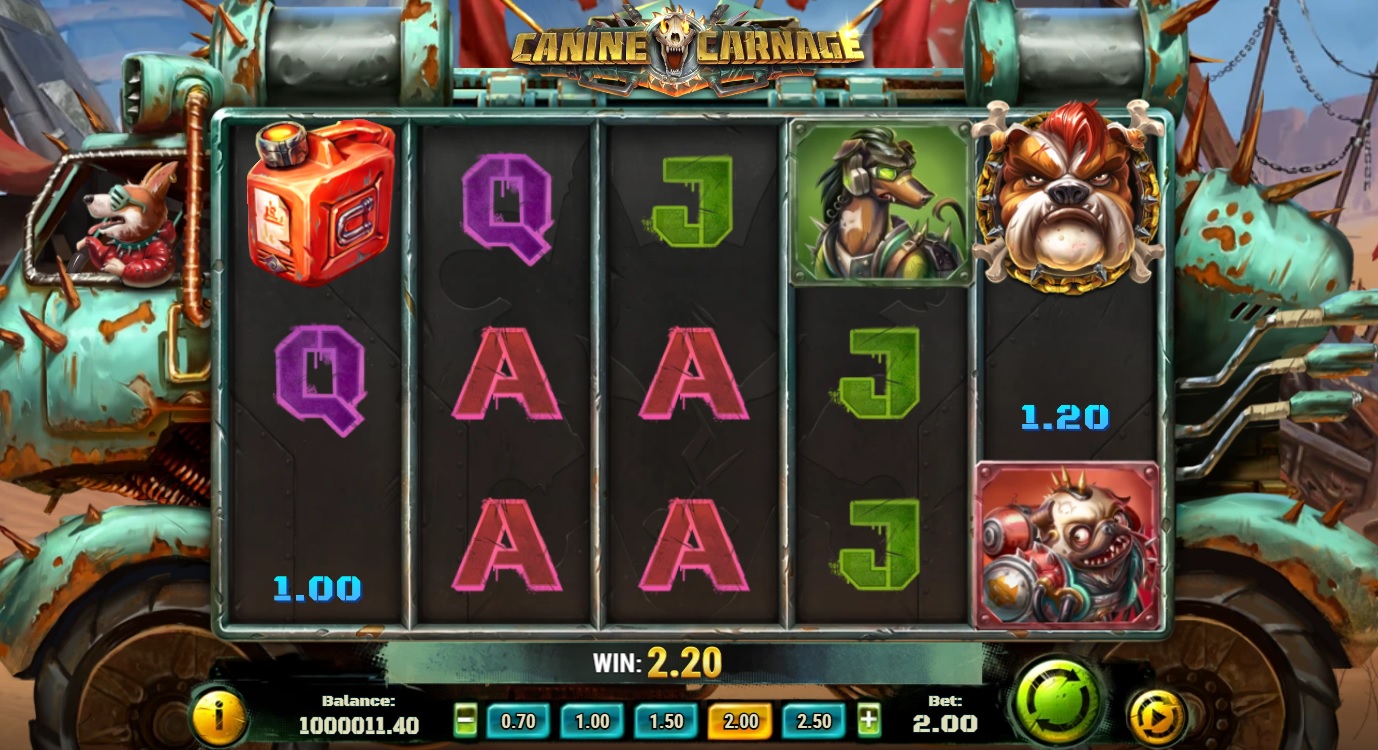 Get all three bonus symbols on reels 1, 3 and 5 at the same time to trigger 6 free spins.

During free spins normal symbols don’t appear and you can only get golden bones, the collection symbol, multipliers and a special saw symbol.

Any golden bone landing will instantly be awarded, even without a collect symbol. But the values are also added into a cash pot on top of the reels. When a collect symbols appear it will collect the total cash pot value.

During free spins multiplier symbols can also still appear. Which will also be collected and can only increase. This multiplier is only applied on the cash pot winnings.

Saw symbols will now replace the wild symbols. They will split all bones that are on the right of the saw. 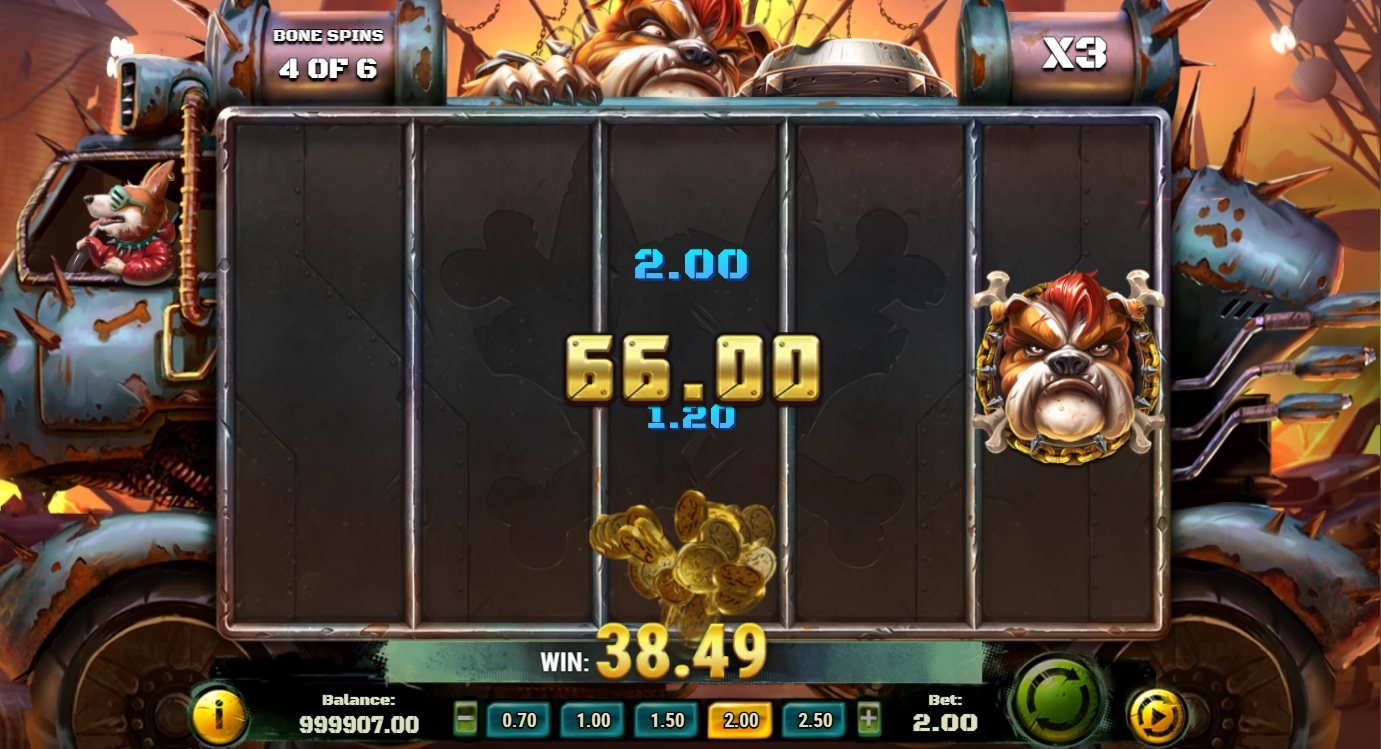 Canine Carnage feels like a mix of several different slot games, which all use apocalyptic and dig themes. Somehow these games all feel a bit alike.

I personally am not a big fan of this theme. For me it’s too dark or gloomy maybe. But I was also not a fan of Mad Max movies.

But the game itself is pretty fun. There are enough features going on to keep the game interesting and going. And free spins seem to appear pretty often.

But the maximum payout of this game, which is 3.000 times bet, does seem to show. Because I haven’t seen really big wins yet. Most of the time the free spins award between 50 and 100 times bet. I think the game could have been improved by a higher payout.

But then again, this is a medium volatile game, so more interesting for most players.

You will find Canine Carnage at top casinos like Energy Casino>>, CasinoFriday>> and Leo Vegas>>.