This new slot game seems to be set in heaven, or at least a very heavenly place and is very colorful.

The game has 5 reels that are 3 symbols high and comes with 15 lines.

Besides standard card symbols you will also find symbols like a harp, grapes and Dionysus himself. There are wild symbols in the form of ancient bottles. The game also uses two types of scatter symbols, golden en silver. Both represented by those laughing and crying masks.

Dionysus Golden Feast comes with a maximum payout of 7.500 times your bet.

Wild symbols come with a x2 multiplier. Getting more than one in a winning combination will multiply each other. So 5 wild symbols would multiply by x32. These wilds are active in both the base game and during free spins. 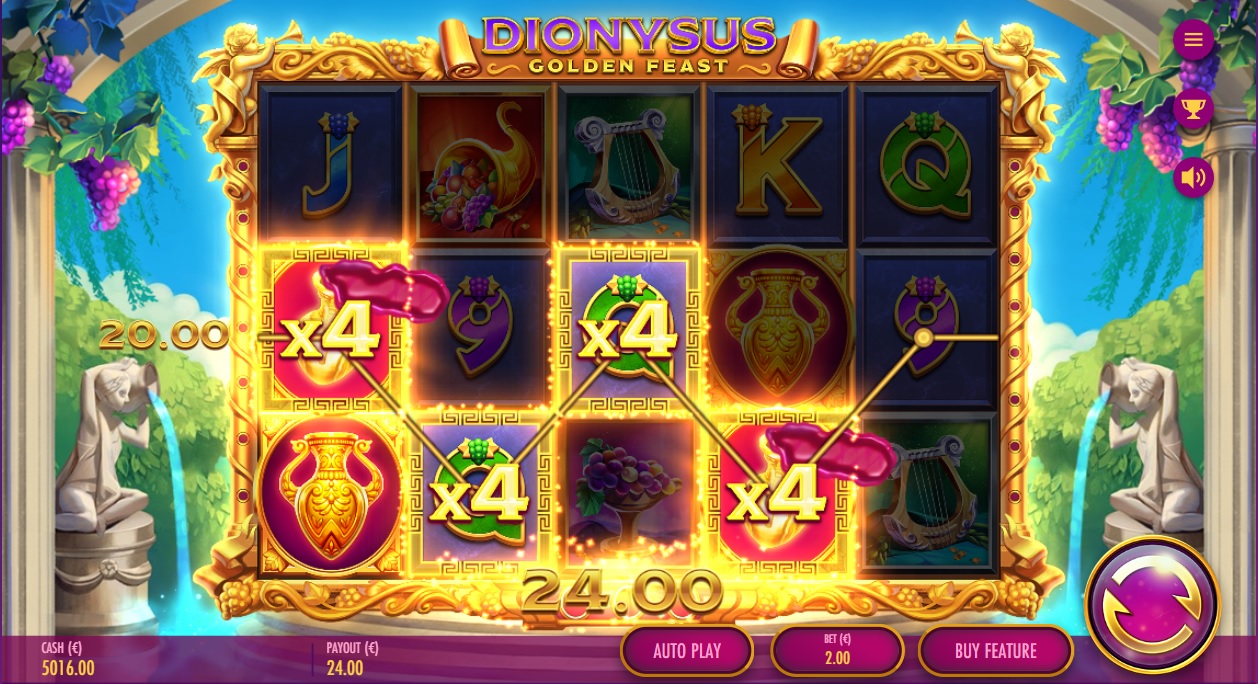 When one or more Golden Scatter symbols land they will turn into a random normal symbol. Kind of like a mystery symbol. After this all symbols on the reels that match become sticky symbols and you are awarded free respins. When a new golden scatter lands and it shows another random symbol, all sticky symbols will change into the one that is the highest paying one.

3 or more scatter symbols, no matter silver or golden, will award 8 free spins.

During free spins one random gold scatter is placed on the reels during each spin. Triggering the Sticky Respins.

Scatter symbols are now collected during respins and collecting three of them during a respin feature will add 4 more free spins.

For 85 times your bet you are able to buy the free spins feature.

Thunderkick loves to use ancient mythology in their games. And to be honest, I think they do it best. Games like Beat the Beast – Quetzalcoatl’s Liar or Midas Golden Touch are amazing.

And Thunderkick also manages to create interesting new slot games that feel very familiar, but are also still different from each other. They all have small differences that make the games fun.

With Dionysus Golden Feast they managed to do that again. They have uses multiplier wilds before, they also have used respins before. But now they have added those wilds that will change into a random symbol. But also the option to buy the bonus, which not a lot of Thunderkick slots have.

I think Dionysus Golden Feast is again a great addition to their catalogue of games. And definitely worth a try.

You will find the game at casinos like Casumo>>, Wheelz>> and Dux Casino>>.