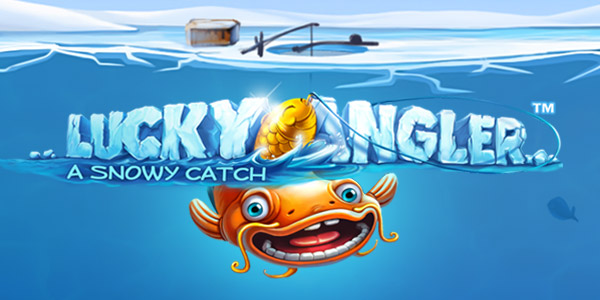 Lucky Angler, a Snowy Catch slot game from NetEnt was released back in 2012, but unfortunately discontinued in 2020. But you can still try out Dark King – Forbidden Riches, which is, free spins feature wise, the same game.

Lucky Angler – A Snowy Catch came with a very fun looking fishing theme. Ice fishing to be exact. With standard card symbols and all sorts of fish. It used 5 reels, each 3 symbols high and 15 paylines, but the game did pay both ways.

On Lucky Angler, during the normal spins, you could get sticky wilds on reels 2 and/or 4 that stayed on the reels as long as you gotten a win with them. And you could get more than 1 wild symbol. The more you had on-screen, the higher the chance it would complete a win.

During the free spins the middle symbol of reel 3 would stay wild and those sticky wilds on reels 2 and 4 would also still appear. And what made this game so nice is the fact that when you got one of those extra sticky wilds it is almost impossible not to get a winning combination with it, because of that extra wild on reel 3.

All extra wilds landing would become sticky, as long as they were used in a winning combination.

Because this slot payed from both ways and because of how the paylines are, it is only possible to lose a sticky wild when there are scatter symbols on exactly the wrong spot.

So you can imagine getting a couple of those sticky wilds during free spins made a block of wilds on reels 2, 3 and 4, making almost every spin a big win.

Unfortunately the game was discontinued in 202 because of a lack of interest.

Which I think is a shame. The theme was a lot of fun and looked amazing and the game came with cool features.