Pragmatic Play released a new online slot game, Heart of Rio. Well, not really a new slot game because it’s an exact copy of John Hunter and the Tomb of the Scarab Queen.

Heart of Rio comes with 25 lines on 5 reels, each 3 symbols high. 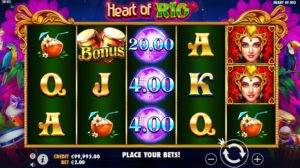 As I mention above the game features disco ball symbols that have cash values on them. When one or more of these appear on the reels and a special symbol appears on reel 5 you will collect all values on the other reels.

But this special symbol on reel 5 can also increase the disco ball values. Here are all modifiers.

If you get all three scatter symbols on reels 2, 3 and 4 you are awarded with 8 free spins.

Also all value symbols appearing during free spins are collected. After the free spins you get 1 free spin where if you get a collect symbol on reel 5 you will collect that total amount of the free spins.

This new version is an exact copy of John Hunter and the Tomb of the Scarab Queen. Why they added another version with a new theme, I have no idea. Maybe this theme will get more players excited.

I already liked the old version and so I also like this new version. But I don’t think a new version needed to be added.

You can play Heart of Rio at casinos like Leo Vegas>> and Guts>>.